TSC vs Knut fight: Tale of child trying to choke a parent 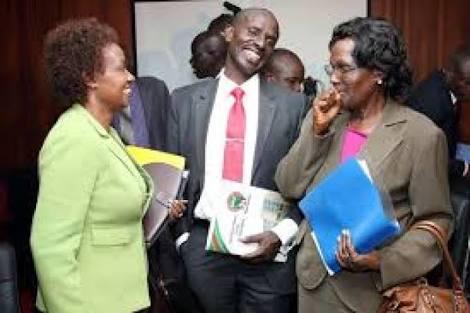 When things are thick, so goes a Swahili saying, a log will serve as a canoe to cross a dangerous river. But once the master is safe from the treacherous crocodiles, he will happily split the log and turn it into firewood.

This appears to have been the case in Kenya’s education system where the membership of the oldest and biggest trade union has been systematically split and the splinters used to fuel the fire that is set to extinguish the used teachers’ mouthpiece.

This love-and-hate relationship between the Teachers Service Commission (TSC) and the Kenyan National Union of Teachers (Knut) has been going on for 53 years, even though long before this, the teacher and his employer had been playing hide-and-seek with each other since the introduction of education by the missionaries.

To better understand the love and mutual hostility, which has persisted for close to a century, the quest for answers will start at a garage in Ruiru, where a college tutor first assembled a desk and cobbled up a union to represent teachers.

Long before the Kilimambogo Teachers College tutor, Stephen Kioni, gave up his teaching job in 1960, some colonial era teachers had borne the brunt of oppression and mistreatment by their various employers.

It was common in those days for two teachers of the same age and similar training and academic credentials to earn different salaries depending on their employers. In one instance, a teacher employed by African Inland Church (AIC) could be paid Sh85.50 a month, while a colleague contracted by the Anglican Church would be taking home Sh132 in 1958.

And in the event a teacher changed employer, there was no mechanism for transferring the benefits accrued from the years worked elsewhere, so they would leave empty-handed.

Pioneer teachers Eliud Mathu and James Gichuru, who had taught at Alliance High School, could no longer stomach the poor pay and harassment by Carrey Francis and they quit. They then teamed up to form the Kenya African Teachers Union (KATU). The new union soon died following intense pressure from the government.

The suffering motivated a former teacher, Daniel arap Moi, who had just been elected a Member of the Legislative Council, to move a debate in December 1956, proposing the formation of African Teachers Association.

“Teaching, he argued, was a profession which would bring up future leaders. He contended that a professional association would maintain discipline and standards as well as allow airing of grievances about pay and conditions,” writes the former President’s biographer, Andrew Morton, in Moi: The Making of an African Statesman.

With the passage of the Bill tabled by Moi, then Minister of Education WF Coutts called all the leaders of the various regional associations to a meeting in December 1957 at Pumwani DEB School.

It is at Pumwani that the regional associations were dissolved and the Kenya National Union of Teachers (Knut) born. The conference formed an interim central executive committee, with Ignatius Mkok as interim president and Kioni interim secretary general.
Knut registered

A year later on December 10, 1958, the interim officials held an annual conference at Pumwani DEB School, which then ratified the Knut constitution and Samwel Ayany was elected president and Kioni confirmed as secretary general. And on May 14, 1959, Knut was registered as a trade union.

Even with the birth of Knut, the teachers’ woes were far from over. The teachers were so poor that they could not contribute membership fee. As a result, Kioni, who had retired, had no pay nor office.

By a stroke of luck, when Ayany attended a World Confederation of Organisations of the Teaching Profession Assembly in Rome in 1960, he got Knut affiliated to the global union. He also pleaded with global confederation to provide funds which were used to pay Kioni’s salary.

And for four years, Kioni would derive his pay from this donor until the union started getting some money from teachers, deducted through a check-off system by the employer.

Kioni organised two strikes in 1962 to pressurise the government to establish a single employer and harmonise payments and working conditions.

The colonial government was jolted into forming a negotiation committee chaired by W Rogers but was unwilling to implement the agreement, triggering a third strike on January 1, 1963.

Although Knut had a raft of demands, including having a single employer, the government accepted to introduce a check-off system for collection of union dues, effected in 1964.

Three years later when Knut’s patience ran thin, it called a national strike on October 1, 1965 to force the government, now under Jomo Kenyatta, to fulfill the 1962 agreement.
Predictably, the government formed a commission under lawyer SN Waruhiu, which came up with a framework of how the teachers were to engage with the government.

Suspicious of the government’s commitment, Knut organised another strike on November 1 and 3, 1966, just when the national examinations were to start.

This time, the government ran out of options and on December 1, 1966, Education Minister Jeremiah Nyagah hurriedly tabled the Teachers Service Commission Bill in Parliament, which was passed into law in a record two weeks.

During the debate, then Bungoma East MP Khaoya said, “It is the duty of this House to make the profession of teachers as attractive as any other so that anybody with a degree could come and say that their first priority is teaching. This is not the situation at the moment.”

Three years after TSC Act became operational on July 1, 1966, the government claimed the first scalp when Kioni was arrested and later jailed for stealing Sh5,000 from Murang’a branch.

The exit of Kioni from Knut paved way for the election of Ambrose Adeya Adongo, who would steer the giant union for the next 30 years to the day he died in March 2001.

Adongo is a legend among teachers after he led the 1997 teachers’ strike, which was demanding, among other things, a 300 per cent salary increment. The current and sixth secretary general, Wilson Sossion, who took office in 2013 has been a thorn in the flesh of the government and by extension the TSC, which has perfected the art of using the carrot and stick to tame him and his members.

Two months after Knut marked its birthday, Macharia wrote to Sossion on July 29, 2019, accusing him of paralysing the competency-based curriculum training in April in various counties and accepting nomination by ODM as an MP in 2017, contrary to TSC regulations.

And only five months after Knut marked its 61st birthday, the TSC has delivered another sucker punch.

On November 4, the teachers’ employer issued a notice, which read in part, “… the commission hereby issues a two months’ notice to Knut to terminate and/or revoke the recognition agreement dated May 15, 1968. Knut does not have the simple majority of unionisable members...”

Now Knut’s future looks bleak, and the teachers are more vulnerable than they were during the colonial era.