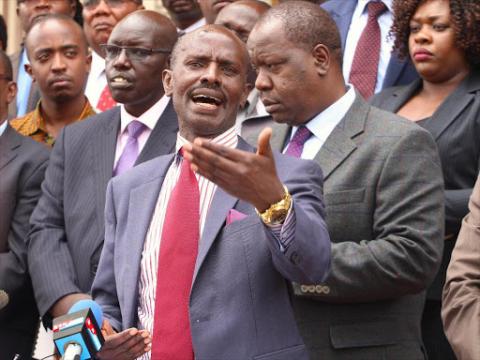 The Kenya National Union of Teachers (Knut) has issued a 22-day ultimatum to the government to address outstanding issues before schools reopen in January.

Yesterday, Knut demanded the end of centralised procurement of course books, a stop to teachers delocalisation and for headteachers to be allowed to join the union.

It called for the suspension of the National Education Management Information System (Nemis) launched in 2017. The union also wants teachers who work extra hours to be paid overtime allowance.

Speaking in Mombasa, the union’s top leadership said the Teachers Service Commission (TSC) and Ministry of Education should resolve their grievances before Christmas.

The officials said the State had failed to implement plans that would facilitate seamless rollout of the Competence Based Curriculum.

Nemis, a web-based system that captures the details of students, teaching and non-teaching staff, aims to address issues of transparency and accountability in funding of schools.

Headteachers meeting in Mombasa said the system was being exploited by bureaucrats out to frustrate teachers by delaying the disbursement of the capitation grants.

“Nemis must be withdrawn because it is now being misused to punish teachers. Its use should be stopped until teachers’ representatives meet ministry officials to address the challenges they are facing in using the system,” said Mr Sossion.

He said although Knut was extending an olive branch to TSC and the Ministry of Education, it would not abdicate its responsibility of defending teachers.

“TSC should not imagine that they can choose the leadership of the union. TSC’s attempt to revoke a recognition agreement signed in 1968 is the lowest point it can go,” he said.

Addressing Kenya Primary School Headteachers Association (KePSHA) delegates, Sossion called for abolishing of the policy that pupils with fees arrears should not be denied certificates.

The union said they would support the implementation of the CBC on condition that there will be continuous training of teachers and headteachers.

“Capacity building for teachers is not a choice. What they are now doing is holding three-day seminars and claim they have trained teachers,” said Sossion, opposing TSC’s move to deduct Sh500 from teachers’ salaries for training.

KePSHA and Knut said the centralised textbook distribution model had led to poor quality of books with many errors, and that the system was prone to corruption.

“According to International Labour Organisation convention, it is the teacher who is supposed to select books for learners from the Orange Book,” said Sossion.

Knut and KePSHA now want the government to revert to the old system where teachers selected textbooks from the Orange Book.

The two bodies said the government should strengthen audit systems to monitor the budgets or expenditures in the purchase of learning materials by teachers.

“A mathematics book for a pupil in Nairobi Primary cannot be the same as the one for a pupil in Wajir because they are at different levels,” said Sossion.

Knut said the directive that headteachers should not deny candidates certificates because of fee arrears was being abused by dishonest parents and should be rescinded.

The headteachers are expected to deliberate the challenges facing CBC implementation, including shortage of teachers, inadequate infrastructure and funds.

“In the past, the government used to give us money and we would sit down to evaluate or vet books. That does not happen anymore,” said Mr Gathemia.

They claimed that teachers had been left out in the selection of textbooks for learners, adding that the course books were far below standards.

Gathemia said headteachers should be involved in selecting textbooks as well as come up with a seamless distribution model.

“Headteachers are left with the burden of transporting the books from the headquarters and sub-county despite the fact that we have no budget for that,” said Gathemia.